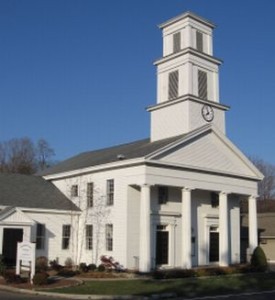 THE CONGREGATIONAL CHURCH OF BURLINGTON – was first built on the corner of George Washington Turnpike and Belden Road where the stone formation can still be seen. In 1836 the church was taken down and moved to its present location. It is said that the only original exterior part now is the small window in the rear of the steeple.

Since that time several additions have been made such as the Chapel and Sunday school rooms, and of course the horse sheds have been taken down. The church has been almost completely’ renovated and painted in the past year.

THE MANSE – was bought by the Congregational Church in 1849 and first used by the Rev. James Wright. It has been used as the ministers residence ever since (except for a short time) until sold prior to 2000.

BIGWOOD PARSONAGE – was bought by the Congregational Church in 2001 and first used by the Rev. Wendell Taylor and his wife to raise their three daughters. This was sold in 2018 to allow maximum flexibility for our current and future pastors.