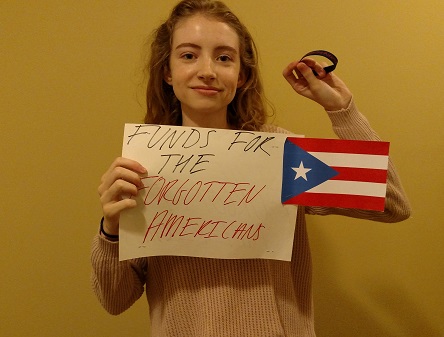 The Lewis S. Mills Model United Nations club has put their efforts to helping the forgotten Americans in Puerto Rico that are still dealing with massive devastation months later with no real timetable for acceptable restorations and repairs.

Katharine Burns, an active Model UN member, began selling symbolic wrist bands for $2.00 to help raise funds that will be given to UNICEF for Puerto Rico last Sunday after service.  She thanks everyone who supported this cause so far.

She will be collecting for the Forgotten Americans of Puerto Rico the next two Sundays after service (11/12 and 11/19).

Imagine having our town literally blown away and how long it would take to get “back to normal”.  Now, imagine being in the middle of the ocean and being pushed off the news cycles and, quite literally, being forgotten.  They need more help, more focus and more funds.

Katharine asked me to share these facts to drive home the reason why her LSM Model UN club is taking on this initiative to help bring awareness and much needed funds:

Look for Katharine during our after service Coffee Fellowship the next two Sundays and she will let us know how well they do in a few weeks.